Skip to content
HomeUncategorisedSkyrim, the Game That Almost Made Me Give Up Reviewing

GATT’s GamerX: It is on a rare occasion that you come across a turning point in a franchise’s history. I played, but never finished Elder Scrolls III Morrowind, and Elder Scrolls IV Oblivion; Why? Simply because I got bored in the games before the arc was done. Enter The Elder Scrolls V: Skyrim, a game lauded by many people as one of the finest games in history, and with good reason it is. In fact, playing Skyrim for 130 hours without even knowing that I had been playing that long made me re-think game reviewing as a whole. 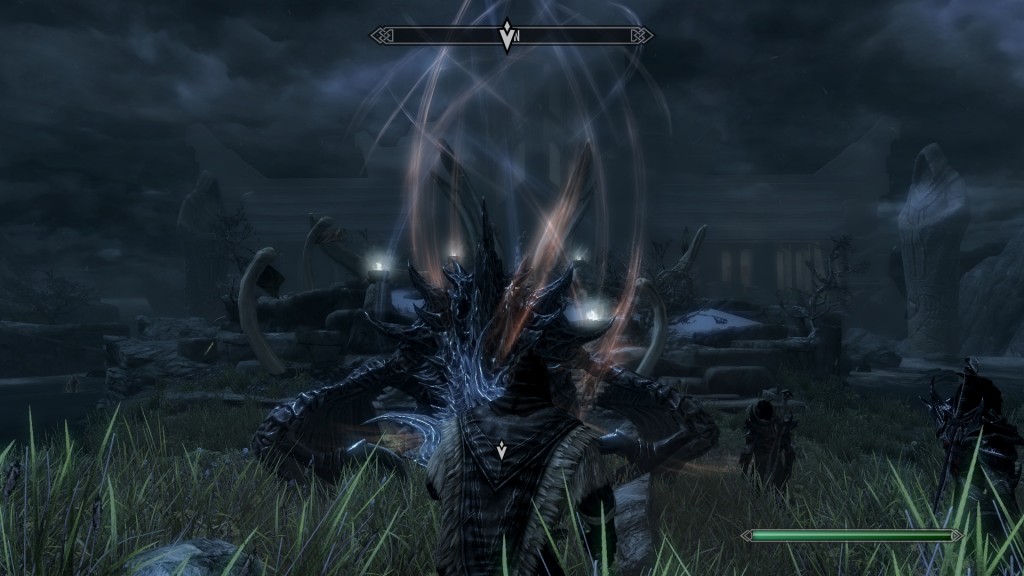 I have always been a role player. Kid’s in school used to make me say “I like role play”, because some of them simply thought it was hilarious. In the previous Elder Scroll games you have been allowed to role play to an extent. You can skill up in various ways, however you were kind of still stuck with an overall archetype. That is the reason I couldn’t finish playing the other games, I wanted more from my character – to be able to play the way that I wanted to play, not a preset character. It’s the same reason I quit MMORPGs that force people into class roles that they don’t want to play simply to see the end game content.

This however all changed when I was introduced to The Elder Scrolls V: Skyrim’s dynamic “play how you want” system. No longer did I need to be confined to one role, a mage. I could now play as the character I always wanted to play as – a battle mage. What is a battle mage you may ask? Simply put it is a mage that wears heavy armor, uses spells and one handed weapons to leap into the fray of battle. This means no why do I have to wear a dress moments; You are primed for the heat of battle with all the other heavy armor wearers, and and mitigate enough damage to be effective.

This feature alone is one of the most revolutionary things to hit MMORPGS or single player RPGs in a very long time. No more okay you are the knight, bring a healer, and a rouge just in case. No – you are a Knight who can heal and go stealth just perfectly. My build at time of review is 100 Conjuration, 100 One-Handed, 78 Light Armor, 80 Heavy Armor, 72 Restoration, 63 Destruction. What does that translate into geek terms? I am a mage who can walk up to you, beat the living crap out of you with my sword while healing myself – mitigate your damage and oh yeah heal myself all at the same time. A character of my own creation, and of my own choice – finally someone worthy of bearing my alter-ego’s name.

This review isn’t about the story, everyone knows that – you kill Dragons, and absorb their energy being a dragon born. This review is about the innovations that the game has brought to the RPG industry as a whole, and will be very tough for anyone to follow up on, with the obvious exception being Bethesda themselves. They have crafted a living breathing world like no other in video game history to date. Taking what people had complaints about and improving them not 100% but 200% to the point of making the game something that nearly anyone who likes gaming can get into.

From the humble beginning’s as a prisoner, you are given the freedom to play the game how you want, where you want, and when you want. Feel like exploring? Go get lost in the woods for hours, perhaps you will discover a new cave that you had previously not and get some good items or a new shout from it. Tired of questing? Stop in and create your own items, then enchant them and have some of the best armor in the game. Want to help out the world? Talk to the inhabitants and listen to what they have to tell you. There are quests ranging from murder to innocence. Anything and everything a person could ever want from a RPG, nay from a game is included in Skyrim.

I myself literally became so engrossed in the game itself that by the time I was 130 hours in I could hardly turn on any other game simply because it wasn’t Skyrim. I would be thinking of things I could accomplish with my character, how I want to progress the character itself, and things I had recently accomplished. It was so bad I haven’t even touched Assassin’s Creed Revelations past the first few missions – I was simply turned off after the sheer freedom of Skyrim. Only after playing another open world game, Saints Row: The Third was I able to break out of the Skryim cycle, but I can still hear the game calling to me telling me to play it and make different choices. It takes a hell of a game to do that to me, and hasn’t been done in quite some time. (Not even with Mass Effect did I replay for alternate choices.)

Elianora herself has clocked in over 300 hours of play time in Skyrim, and she keeps going back for more. Every friend on my Steam friend’s list whom owns Skyrim has close to 100 hours played. Quite simply, the game is a masterpiece. Leaving Whiterun (an in game city) to find a dragon swooping down to attack the city and villagers attacking the dragon back? In any other game it would be completely up to you to kill this dragon – but in Skyrim the world is alive. You’ll often find people various places as they do their daily routines, you can become known in towns by doing deeds and purchasing houses, heck you can even tie the knot (which I did).

So what do I think of Skyrim. I think it is the best game I have ever played hands down. It nearly made me want to give up reviewing other games as after you play Skyrim, most seem bland, on the rails, and boring. This is true for many of the “Killer” games coming out this generation, and while they each may hold their own appeal I don’t think any can hold a candle to Skyrim, and thatis just my honest opinion.

Fan of the series or not, you need to pony up the money and try Skyrim for yourself. Personally the PC version is the best as it allows for mods and much more customization, but heck if you can find it used you should purchase it and give it a try at least. I mean you do have 7 days to return it to GameStop if you don’t like it, which you most likely will love it.